What if in-app purchase came to real life?

On street hustling, Free-to-Play mobile games, and the future of impulse purchases on our phones. 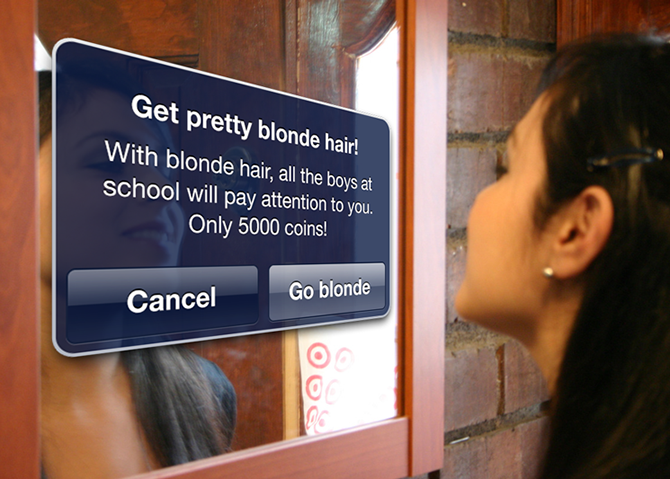 Three-card Monte is a classic street hustler's game. The dealer shows you the target card — say, the ace of spades — then leisurely shuffles it with two other cards and places them in a row, face-down. Your job is to pick the target card. Pick right and you win.

The game starts out shockingly easy. You're offered the chance to play a few rounds for free — or at a very low cost — just to get the hang of it and you win each hand. Not only does your confidence rise with each turn, but you find yourself amped-up from playing the fast-paced game on a bustling street. With your adrenaline rising, you reach into your pocket, pull out your wallet, and drop $20 on the table to up the ante.

The dealer introduced a sleight-of-hand to increase the difficulty of the game — free to play, nearly impossible to win.

The job for the Three-card Monte operator is to build your confidence enough to entice you to reach into your pocket and overcome any second thoughts you might have. Mobile game makers have a word for the obstacles that stand between the player and the designer’s objectives — they call it “friction”.

Let’s try to imagine what would happen if friction were greatly reduced in the real world. If you merely needed to press a button on a piece of glass to put your money down, it might look something like this... 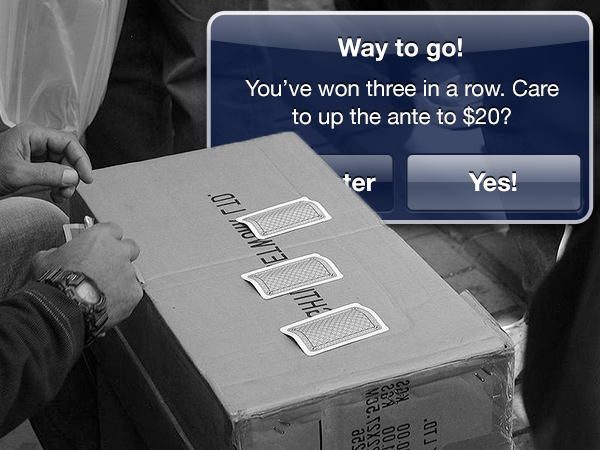 Of course this isn’t just hypothetical — it is emblematic of how a large swath of app developers generate revenue. Known as “freemium” apps, these games and services are free to use at first, then charge for upgrades as the user advances.

While this can often be a good deal for discerning consumers — after all, it amounts to a free trial — it opens the door for potential coercion. Street hustlers, arcades, casinos, video games and even supermarkets, have all utilized the power of the impulse purchase to drive sales.

These industries know customers are more likely to buy when they are:

Unsurprisingly, free-to-play game creators weave these conditions into the very fabric of their games. To boot, game creators benefit from people's natural overconfidence bias, whereby players irrationally overestimate their ability to succeed in a game without the aid of in-app purchase.

These conditions are why we hear stories of kids who racked up thousands of dollars to their iTunes bill, or why Apple agreed to pay $100M to parents of kids who in-app-purchased a hole in their parents' wallets. While kids are often the victims of aggressive tactics in free-to-play games, adults are hardly immune. Mike Rose’s excellent survey of the free-to-play industry highlights adult gamers who play with a gambler mentality.

"There were nights where I'd be up until 3 am drinking beer and playing Team Fortress and chasing those silly hats with purple text, ignoring the gambler's fallacy and swearing that if I dropped another $50 I'd be sure to win this time," he adds. "Then I'd wake up the next morning and see that I'd not only spent over a hundred dollars on digital hats, but failed my only objective by uncrating a bunch of junk."

As this account suggests, a game player can be aware of the pitfall and still succumb to coercion while in the heat of gameplay.

If these dynamics are not familiar to you, I've created a few illustrations of what the real world would look like if it had free-to-play in-app purchases sprinkled throughout your day. This should hopefully evoke some of the visceral anxiety experienced by game players when they hit an in-app purchase wall. 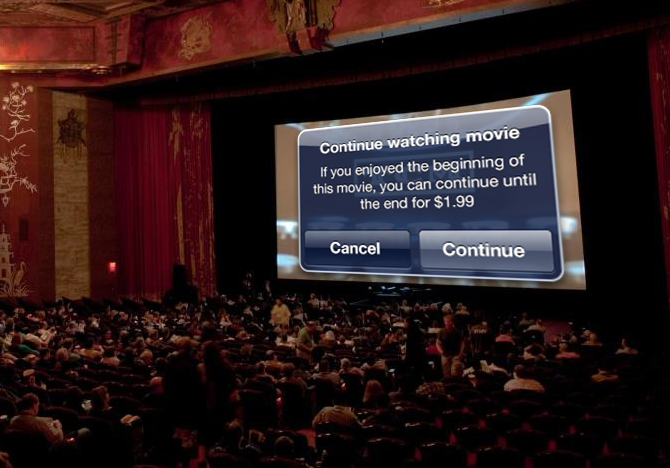 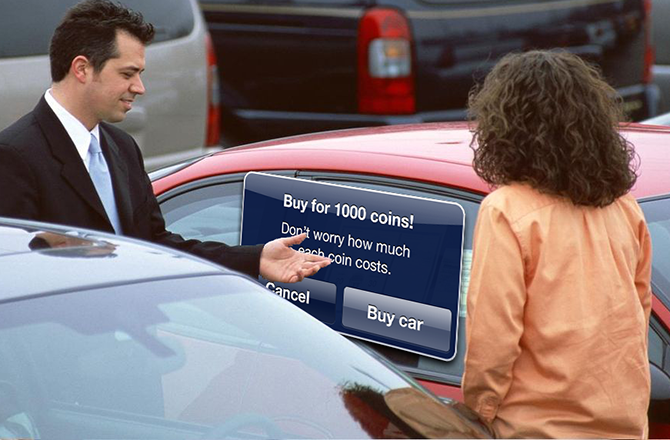 The threat of sunk resources 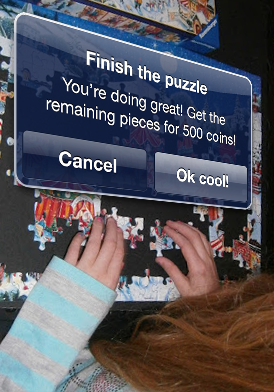 Offering life-saving measures only when you're most vulnerable 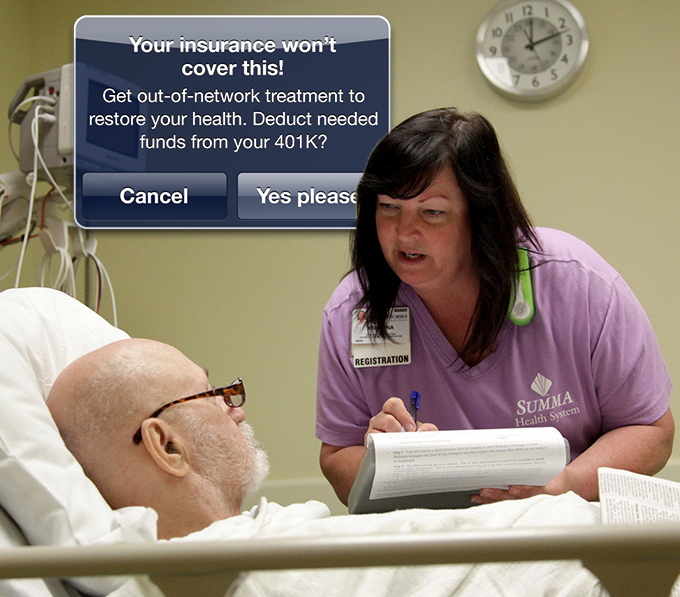 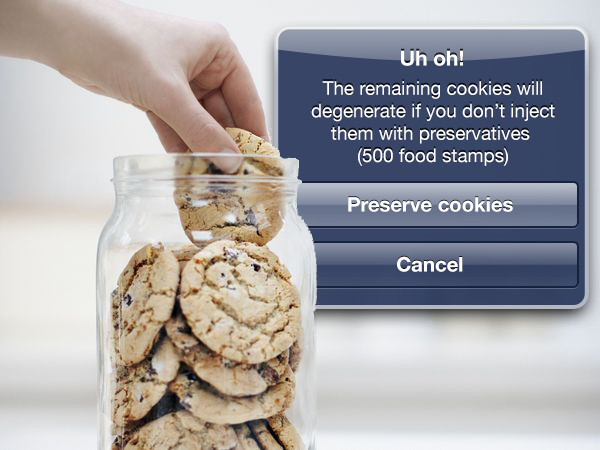 Paying your way to defeating your friend 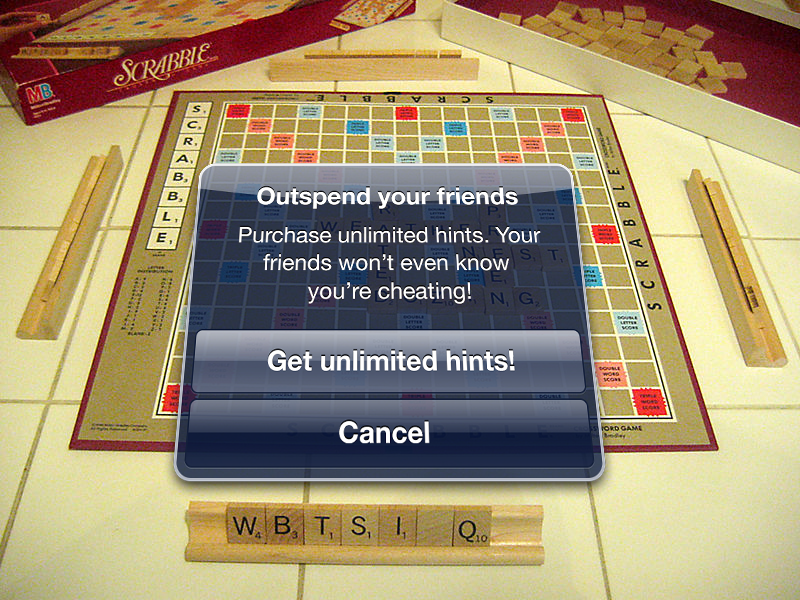 Free-to-play games profit more than any other app genre. A snapshot on August 8th found that 8 out of the top 10 grossing apps in the Apple App Store are free with in-app purchase.

I predict we are going to see more of these tactics used outside the gaming sphere. Our devices will soon be so connected and responsive to our real-world environment, they'll know the moment when we're most willing to make a purchase. As evidence of this trend, consider the news from Google that their new flagship Android device is "always listening". Microsoft recently announced it is developing smartphone systems that can predict your mood with up to 93% accuracy. Nokia is working on technology that can predict, within a 20-meter radius, where you're going to be 24 hours from now.

As Anil Dash once put it, only half-jokingly:

"If you know where everybody is, where they're going, and what they're going to do when they get there, and you can't make money on that, you're a fucking idiot."

By extension, the software on our devices will be better able to predict when we are most likely to transact. The digital services of tomorrow will be able to utilize our data to help make the world easier and more efficient, appearing, as Robert Scoble and Shel Israel have described, in the moment when the service is most needed.

But as apps collect more data about our daily routines, we can expect them to alter our behaviors in unexpected ways. Unlike games of Three-card Monte played on urban street corners, our devices are with us at all times. Consumers will need to be more mindful of how they transact on their devices and we can expect the apps of the future to entice us when we are most vulnerable.

Many thanks to Nir Eyal for his contributions to this post, which also appears today on his blog, Nir and Far.