How you define your brand dictates how grumpy bloggers like me will undermine it. But even if the criticism is inevitable, being relevant enough to be hated is better than not being relevant at all.

"Don't be evil" is easier said than done.

The slogan is a relic from Google's inception as a goofy search website. Suffice it to say, "Don't be evil" would be an unlikely slogan for the data aggregation and advertising giant Google has become. In May of this year, Eric Schmidt called it "the stupidest rule ever".

The ease with which critics of Google have latched onto this slogan — e.g., Wired's "Google is evil" — suggests that Schmidt is at least partially right. Yet when Google was just a search website and barely had the capacity to do anything "evil", that naïve Burning-Man-esque idealism was an effective recruiting tool for employees and users alike. It's unlikely Google would be what it is today if not for that type of "stupid", youthful ambition.

From startups grappling with their first wave of hype to major tech giants racing against the disruption curve, everyone has critics. These critics naturally latch onto the opposite of how product owners want their product to be perceived. The challenge to creators and brand managers is that the positive manner in which you define your brand not only shapes the way new customers see you, or your supporters endorse you, but also defines how your critics will deride you. In defining your brand, you are also promoting its negation.

Take the Jobs-ism "It just works", which is as synonymous with the Apple brand as many of the company's actual, official slogans. From the moment "It just works" was elevated to slogan status, it was inevitable that any major, post-iPhone product which stumbled out of the gate would be tagged with headlines lambasting how the product doesn't "just work". Here's looking at you, iCloud.

Or when Microsoft took a brief detour from smudging its brand (more on that below) by promoting "No compromises" as a clear, bold slogan for Windows 8. Ask MG Siegler how that turned out. 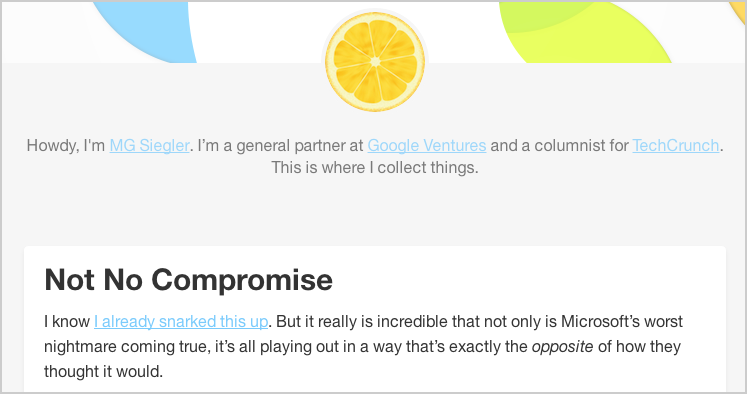 The inevitability of negative criticism isn't an argument for treading lightly. The massive ambition venture capitalists look for in the entrepreneurs they invest in is just one signal that it's better to go big or go home. You can budget the inevitable criticism as a tax on success.

Steve Jobs would engage in the negativity game when he assumed the role of critic. In a conference call with investors, Jobs attempted to flip the script on Google's professed "openness", comparing Apple's "integrated" system to Android's "fragmented" OS. And still today Google suffers from the direct negation of its professed "openness". Commenting on Google's decision to block a third-party app from streaming through Chromecast, John Gruber writes:

"I don’t get it. I mean, no one loves to make “open always wins” jokes at Google’s expense like I do — I really enjoy pointing out the instances where Google, the self-professed corporate king of openness really isn’t open at all."

Gruber's not wrong here — "open" tends to mean something to Google only when it's convenient. But like "don't be evil", you can hardly fault Google for sticking by its motto. Abandoning the "open" aspect of its brand would betray the users and developers who chose Android because iOS was "closed".

Consider the consequence of failing to boldly assert one's brand: It leaves critics with ammunition that's less poignant but no less potent. Steve Ballmer and Carol Bartz of Yahoo were both prone to smudging whatever cohesive images we once had of Microsoft and Yahoo.

In particular, Ballmer's sloppy definitions of Microsoft's brand made upstart Box's job easier. Box didn't need a poignant negation of Microsoft's brand to promote its own; they could simply pin its marketing on how much Microsoft sucks. I suspect Microsoft might have preferred to be called hypocritical than to have been dismissed as irrelevant.

Are there advisable limits on startup braggadocio? Path epitomizes a bold, well-defined brand that lost some part of the narrative through apparent hypocrisy. Path defines itself as a "limited, intimate, more personal [social] network", and its homepage is brandished with the motto "Private messaging and sharing with friends and family."

After a serious privacy gaffe — uploading users contacts without permission — Path was forced to apologize. That apology was later made to seem disingenuous when they were called out for spamming tactics in a much-shared, and devilishly titled post: "The antisocial network". It doesn't take a corporate marketing team to figure out that a post with this headline could make waves — when a blogger is looking to market his own post, he'll look for a title which is amusingly "counterfactual".

What's different between Google and Path's errors of hypocrisy is that Path's came much earlier in their growth curve. Remember, the argument here isn't about whether Google or Path stuck to their guns; it's whether their momentum and success outpaced any flaws with their brand. Path likely needs to win the hearts and minds of geeks to secure its growth, and geeks like myself have plenty of reason to be skeptical now. This is more damaging to Path while it's still a relatively disposable part of some geek's lives. In contrast, it's easier to tolerate Google, Apple or Facebook's hypocrisies when we couldn't imagine living without their products.

All in all, it is almost certainly wise for brands big and small to stand for something bold and well-defined. How willing you are as a company to privately deviate from the values of that brand is a calculation that can't be prescribed en masse, and especially not by me.