The most patronizing way to announce an acquihire

Shutting down a product after an acqui-hire is not something you celebrate with users.

Dispatch is was a clean, simple and effective tool for carrying on a group conversation. I used it to communicate with a group of people around the world whom I've never actually met in person but share a common interest with. The internet is magical.

Our group is seeking an alternative now because Dispatch is shutting down. Excuse me, I got that wrong. The real news is that "Dispatch is joining Meetup!" That's the title of the blog post which delivered the news. 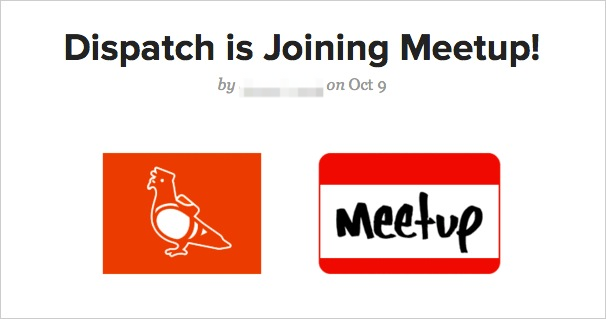 The exclamation point presents this as exciting news, in spite of the fact that the product isn't following the team to their new offices. Exactly what is exciting here? That the team has new jobs?

I would have been fine with this (my edit):

Take away the exclamation point and it comes across matter-of-factly, which is appropriate for delivering the news that the product is shutting down. Removing the exclamation might mitigate the team's enthusiasm for getting new jobs (and presumably a bonus for assembling a team that proved it could build a good product), but exactly who is this blog post directed at if not end users? The exclamation point wouldn't even be great news for Dispatch's investors, who were likely hoping for a greater outcome than an acquihire.

Still, this is blog post title I would have most wanted to see:

The real news here is that the product that "tens of thousands" of people took a chance on are now going to have to migrate to something else . That the company is moving over to work for Meetup is decent news for their staff, as is the notion that the team will "continue [their] mission of connecting people around things they care about." But it took three paragraphs to even mention that the product will be terminated, as if that were an afterthought.

To be clear, I don't have any problem with anyone getting acquihired. It's part of this business. Yet when you consider that most of Dispatch's audience is probably the early adopter, startup type who has either founded a company or aspires to do so (myself included), I can't help but think this played an unfortunate role in blogging about an acquihire in a congratulatory tone.

I also have a hunch that when a company is of the mindset to ask users to high-five them on the way out, even when shutting down their product, they were probably destined for no better than an acquihire to begin with.