Many are finding the Jelly to be a stickier app than expected. I think Jelly's "something" is what it shares with Tinder, Snapchat and others: Most of the app "goes away"

Like a few people I know, the Jelly app has been surprisingly fun to use even after its shiny-new-thing novelty wore off. I have the exact same sentiment as Sarah Perez of TechCrunch, who last week wrote:

Despite my preconceived notions, and despite the tendency for some in the community to respond to inquires with dumb jokes or snark, and despite a handful of minor user interface complaints, I think Jelly has…well, something.

So what is that is that something? When it comes to getting answers, Jelly is less authoritative than Google or Wikipedia, more primitive than Quora, and less integral than Twitter or Facebook.

I think Perez's something is actually more of a nothing. What Jelly has going for is the de-emphasis of the activity feed and the absence of a navigational hierarchy that would lead you to a full history of questions and answers. If you swipe away a question by accident, then tough cookies, you can't go back.

This predicament is familiar to users of Snapchat, Tinder and other "Most of it goes away" apps. Missed a snap on Snapchat or someone on Tinder you wanted to Heart? Sorry, 'dems the breaks.

Fortunately humans are well equipped to deal with this, having years of experience in the real world in which life isn't organized in menus or made editable. Regret something you said at a party last night? Bummer, you can't scroll through the history of your voice utterances and delete it.

Now, what's great about the internet is that it makes one's history easily accessible. I can delete years-old photos on Facebook, search for a tweet I made weeks ago, or pull up a note I took in Evernote who knows how long ago.

But there's a tradeoff, and as Snapchat has shown, people feel unburdened by apps that don't attempt to recreate a rich, deep history every time you fire up the app. Of course Snapchat, Tinder and Jelly are storing most everything on their back end, but from the point of view of end users actually using the app, after you do something, most of it goes away. Even if it's just an illusion that things are lost to the ether, it's a refreshing experience in the way it resembles the real world.

One detail of Jelly goes a long way towards achieving this experience. Take a look at the screenshots of the Jelly and Quora apps. (Bear in mind that I'm not the type who's fanatical about reaching Inbox Zero, Quora Zero, or "Any other app" zero, etc.) 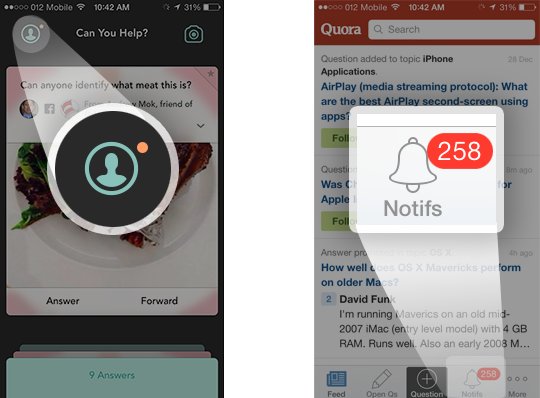 The badge count on Quora is an urgent call-to-action. The end result of all those unread items is that opening Quora now seems like a chore. The "new items" indicator in Jelly, in contrast, is a subtle, gentle suggestion that doesn't distract you from the here and now. Count me in.