The Charm of "Bad" Design

Pretty pixels used to be a signal of an app's quality. Not only is that no longer the case, but there might even be merit to being ugly by design.

A friend of mine recently remarked that "You used to be able to tell if an app was going to be good if it was pretty. That isn't the case now."

I couldn't agree more. Whereas a pretty website or app once was once a reliable signal that a lot of care had been put into an app, it's now common to find very pretty apps that are otherwise underwhelming. Great design is still about how it works more than how it looks, but the latter used to be a much better signal of the former.

Years of increasing awareness about the importance of user interface has led to a greater supply of designers and design tools. More recently, this era of flat design has also made it far easier for anyone with good taste and a few bucks to spend on some icons to build an app with a nice veneer. Prettiness is becoming a commodity.

Yet I don't think we should take it for granted that a pretty user interface is always good for apps. I'm positing that there might even be a class of apps for which it would have been detrimental.

Snapchat and Reddit might offend my design-snob sensibilities, but their only a developer could have made something this ugly designs convey an earnest charm that's absent from so many social networking apps. Snapchat in particular looks like something made by kids for other kids, which I believe makes it seem relatively innocuous and therefore safe to post the kinds of risqué photos it's known for. Would you rather pass your nude selfie through the servers managed by a bunch of seemingly harmless kids, or the servers owned by a publicly traded company (Facebook Poke)?

As we've learned from politics, lack of refinement is often a hallmark of populism. Waze's original design was goofy and erratic. Whatsapp stuck with iOS 1 style nav bars until its iOS 7 redesign, and even then it kept that inscrutable, sallow mosaic as the default wallpaper. I prefer Google Maps and Messages to those two apps because the interfaces are so much cleaner, but as a design snob, I'm a minority. 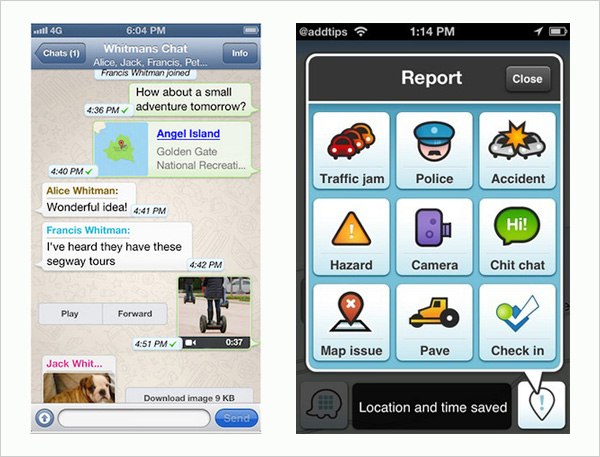 The rough edges of populism

Might it even be possible that some apps would benefit from being ugly by design? Take a look at Whisper or Secret, the much-hyped anonymity apps. I find Secret to be incredibly well designed, and yet it strikes me as the kind of manicured experience that only a techie crowd could fall for. Whisper, on the other hand, looks like a anonymous gossip app should: grungy, sloppy, tacky. It reminiscent of the vBulletin-powered "Gossip Server" that my college's administrators had to shut down back in the early 2000's.

Compare that to, say, Google+ and Facebook, which have been polished into sterility. Or even iOS 7 , which, in spite of the splashes of neon, can sometimes feel spare and cold. Weeks after my wife, a very light user of apps, switched from a Nexus One running Android 2.0 to an iPhone 4S running iOS 7, she complained that her Nexus One was more "comfortable". You get a sense that some things in iOS 7, like the absence of button borders and now the shift key, were overthought.

Some felt that iOS 7 lost its sense of whimsy and playfulness. That's why iOS 7.1 includes a guessing game built right in to the keyboard

The average user's aversion to "overthinking" is what can make pretty designs difficult to trust, and rough, developer-graphic designs occasionally more inviting: If a software team doesn't appear to have put too much thought into design, you might also assume that they haven't put much thought into the more insidious, calculating aspects of software we've grown to distrust.