Emoticons are the enemy of humor :-D

As expressive as emojis and emoticons are, their conspicuousness often spoils jokes

Emoticons and emojis are in some way more expressive than words. Once I set up an appointment for drinks, including the time and place, with a friend only using emojis. That's amazing.

Emojis and emoticons bring color, figuratively and, in the former case, literally, to your conversation. They also condense expressions that are otherwise wordy or clunky to express with text.

Malcolm Gladwell is seated at the table next to me 😮

I can't even think of what text I would have replaced the emoji with there. Perhaps "How neat!", but the emoji is more fun and pithier.

However, the problem with emoticons and emojis is that they're very conspicuous when placed in a sentence. Whether it's the first or fifth time you've read the tweet above, you can't look at the sentence without looking at the emoji first. In other words, before you've even read the sentence, you already know the emoji is there.

As an exercise, try reading the text below without looking at the emoticon. Of course now you've been primed to look for an emoticon, but I could also tell you that the word "so" is in the sentence and it would be much more difficult to find.

This is problematic because humor relies on not knowing the denouement of what someone's saying. Henny Youngman's "Take my wife...please" is funny because he leads you to believe he's using "take" in the "for example" sense. "Please" is a surprising denouement, and it's funny because you quickly realize you've been duped into the wrong sense of "take".

(The one-liner joke is akin to what linguists call a "garden path sentence" such as "Fat people eat accumulates". You first think that "fat people" means "people who are fat". It's only until you see the "s" in "accumulates" that you realize it must be bound to a singular noun, which must be "fat"; suddenly the sentence has a brand new meaning).

The conspicuousness of emojis spoil the surprise denouement because you know in advance that something is being said in jest. Consider how different it would be to read: "Take my wife...please! :-)" Since you've noticed the emoticon from the get go, you already know that whatever's in the sentence is not to be taken seriously; the lack of surprise makes it only barely funny.

When I realized all this a few weeks ago I set out to abstain from emojis and emoticons. This proved surprisingly difficult, and ultimately untenable, because 1) I have a (much beloved) deadpan sense of humor and 2) people have grown so accustomed to seeing them appended to jokes. I commonly feared that if I didn't append an emoji, the person on the other end would think I was being earnest.

It's only because I'm so close and familiar with my father that I could send him something like this below without worrying that he'd take it seriously (though even with my father I hesitated to omit the emoji). 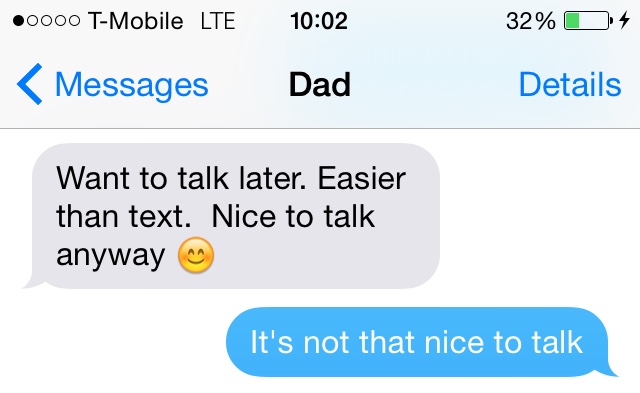 When in email or instant message with someone I didn't know well, though, I couldn't maintain the emoji diet. It was simply untenable to joke without using an emoji, lest they think I was just a wacko instead of the hilarious guy I actually am.

There's a larger trend at play here: Americans' tendency to sorta kinda mitigate almost everything they say. People rarely say things as simple as "I'm happy" anymore; they'll often, and needlessly, qualify it with "pretty", as in "I'm pretty happy". And stuff like that.

I don't know what to make of all this, but I know that Twain would probably be, like, ashamed ;-)