Some friends and I set out to make the simplest, most comfortable app for following pro football.

Moral abomination though it may be*, I love football. My friends love it. We love it enough that we made an app for following football: Introducing Fifty for iPhone.

The inspiration for Fifty came from a few places. For one, we were all constantly toggling between a few apps while games were on: ESPN for scores, Twitter for news and commentary, Messages for chatting with friends, and a few other apps and websites. We wanted to bring a few of these things into a single app. We captured everything but messaging in this initial version but might add messaging at some point.

One website among "other apps and websites" were the Live Win Probability graphs on Advanced Football Analytics. Geeky as "advanced football analytics" and "win probability graphs" may sound, they tell a concise and elegant story about every game. At a quick glance, you can see that one of this Thanksgiving's games was a blowout by the Seahawks over the 49ers. If you remember the 2013 Super Bowl between the Ravens and 49ers, you'll recall that while Ravens were up for most of the game, the 49ers nearly pulled off a comeback in the 4th quarter. Here's what that looks like: 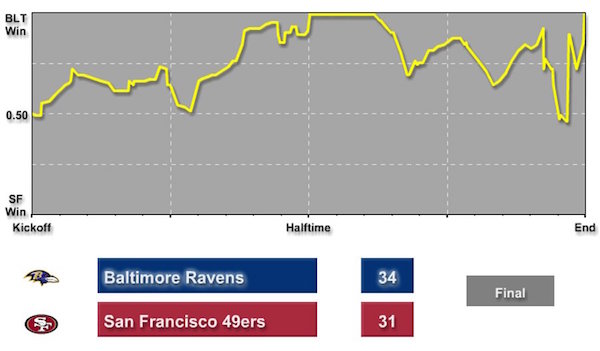 And only last week, there was a great game between the Rams and Chargers that the Rams nearly won in the end. The Chargers had the ball with a three point lead with less than two minutes left, which gave them a 91% win probability (and the Rams' 9%). A defensive stop by the Rams and an unlikely drive down the field totally swung the game: the Rams Win Probability shot up from 9% to 76% in the course of one minute of game play. An interception, though, killed the Rams drive and their chances to win the game. Here's how that game looked in our app: 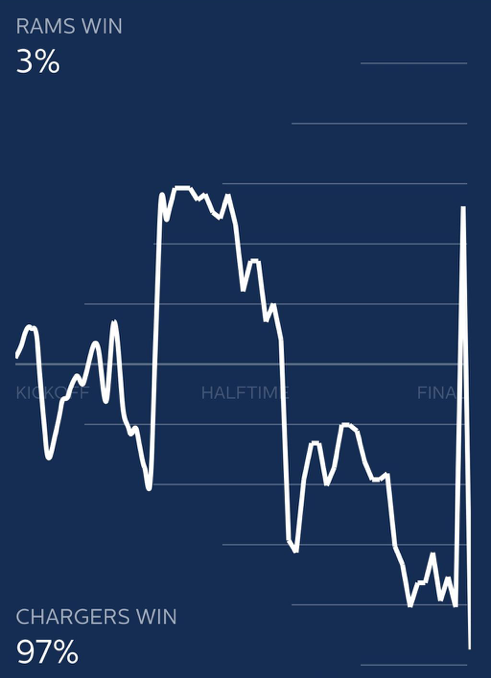 We're really proud to be working with Brian Burke of Advanced Football Analytics on this app. Brian is one of the foremost statistical analysts for the game of football. He's a frequent panelist at the MIT Sloan Sports Analytics Conference, but for those of you who aren't following advanced football analytics — the vast majority of football fans — you may be familiar with his work as the analyst behind ESPN the Magazine's 2014 NFL Team Predictions.

The other thing you'll notice right off the bat are the Twitter feeds in Fifty. All the best, live football commentary happens on Twitter. For geeks like us, we have Twitter lists for following football and other sports. But for the many that are intimidated by Twitter, or just plain aren't that into it, we make it simple and easy for them by presenting relevant tweets for each game. Each game in Fifty presents tweets by NFL observers and beat writers and bloggers for the two teams in the tilt. Just download the app, pick a game or a team, and you can immediately start scrolling lots of great stuff. No need to follow anyone or search for hashtags. No need to even sign up. Just start scrolling and enjoying. 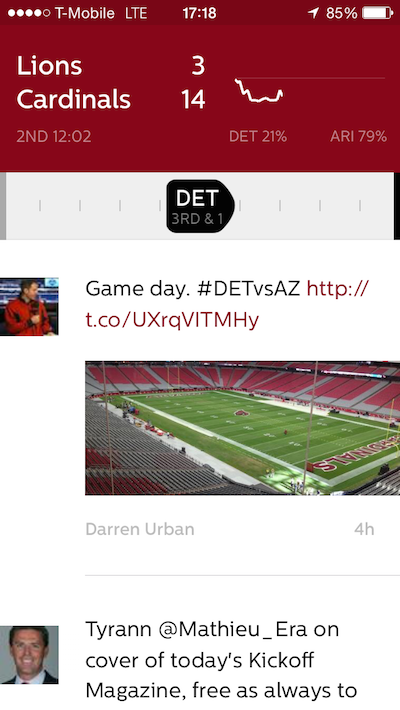 One neat feature: You can shake the app to change team colors. 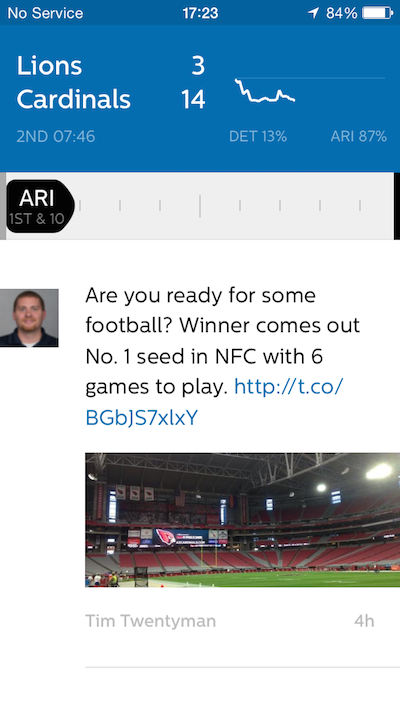 Hopefully you've also noticed how simple Fifty is. The Twitter feeds don't have all those inscrutable lines and symbols that litter the official Twitter app. And we don't show any game, player or team statistics besides the score (and definitely not any fantasy stats). The world already has apps for that. 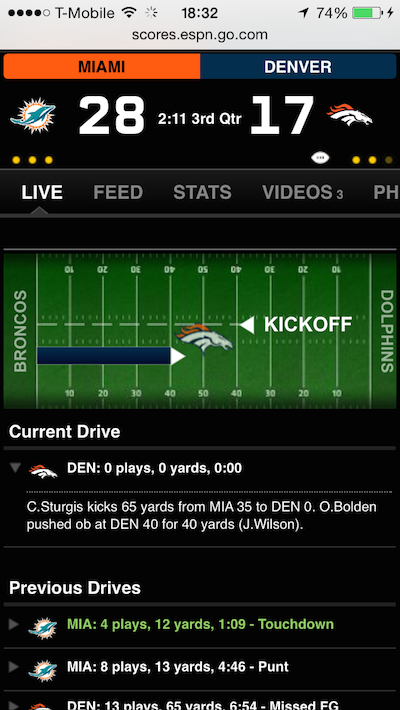 We wanted to build an app that didn't require you to take your attention away from the game on the TV, require you to flit your eyes around the tiny black rectangle in your hand, parse numbers and names in a small font size, or manipulate your finger to the side to tap on one tiny link rather than another. In that spirit, and inspired by Jared Sinclair's Unread app, we wanted to make an app that was really comfortable. We just want it to be the simplest, most comfortable app for following pro football.

In the future we will likely replicate the app for other sports, smooth out a bunch of rough edges, and add all the features that we just didn't have time for, but the NFL season was running short and we really wanted to get this out to everyone. We're really proud of Fifty, and we hope that you soon discover we're so proud: Download Fifty on the App Store.