Don't judge a Bitcoin by its price

Bitcoin's price dropped in 2014, but so did the price of another unit in the midst of a thriving economy.

The most popular and most intuitive measure for the health of the Bitcoin ecosystem is its price. And in some ways it's the most accurate. Fred (here at USV where I work) blogged today about Bitcoin's rough 2014. For Bitcoin pessimists the rough 2014 serves as vindication; maybe 2014 even converted some Bitcoin optimists to pessimists.

But take a look at the chart below. As you can guess, I've deliberately hid the axes and labels to obscure what this graph is about. 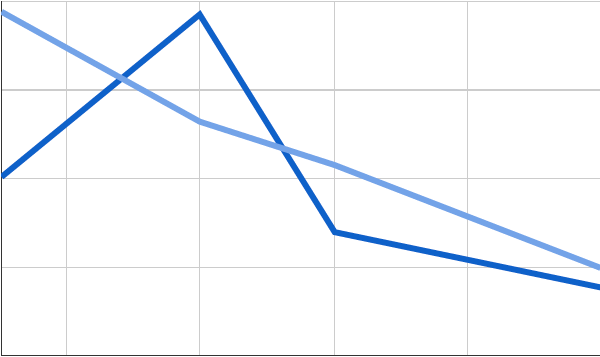 And now the big reveal: The lighter blue line is the approximate average price of a mobile app from 2010 to mid-2013 (via some quick math based on Flurry's report). This was the best data I could find in a pinch, which is why it stops in mid-2013. But just about everyone can surmise, based on anecdotal experience or industry observation, that the average price of an app has continued to drop since then.

Yes, it's bizarre to compare quarters of Bitcoin to years of mobile apps. To that objection, hopefully you can allow that Bitcoin is still in its early going and working on a shorter time scale.

It's also bizarre to compare the price of Bitcoin to the price of apps. We know that freemium is driving growth in mobile app revenue, so shouldn't that be the measure of mobile app growth? After all, in spite of dropping in price, App Store revenues are up 50% over 2013! It's absolutely correct that the average price of a mobile app is a terrible measure for the health of the mobile app ecosystem.

By the same token, the price of Bitcoin is a flawed measure of the health of the ecosystem. (Much in the same way that the price of USD is correlated with the health of the US economy, but can never serve as a direct measure.) A real assessment of Bitcoin's health would also look at a whole host of metrics in the Coindesk report that Fred points to, which portrays the Bitcoin ecosystem as maturing and growing. Take, for example, overall trading volume in from 2013 to 2014: 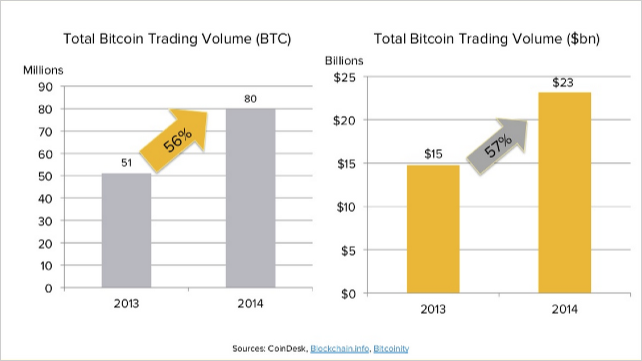 No one knows what the price of Bitcoin needs to be to support a vibrant Bitcoin ecosystem. Whether you're a Bitcoin optimist or pessimist based on its fundamentals, please at least be patient and take the long view. Even better, the nuanced long view.