On the last episode of the Talk Show, Matthew Panzarino, co-editor of TechCrunch, described Meerkat as a "Twitter accessory". "Accessory" struck me as just the right term for Meerkat and other third-party apps and services that live on top of networks. There are "accessories" to Twitter, Facebook, LinkedIn and many of the other dominant networks.

Any network begins with a Core. Facebook is, at its core, a public directory of real-world identities that share updates in a Newsfeed. Without them, you have no foundation for the Facebook Network. 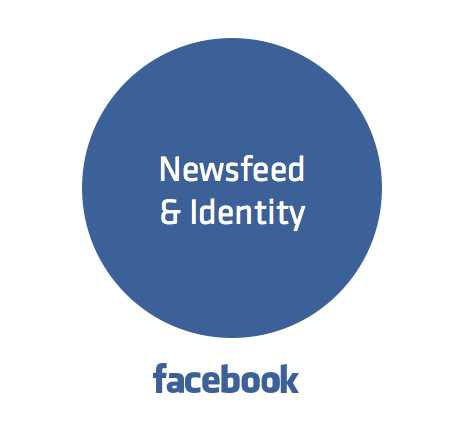 Surrounding the core is a small set of Utilities. In Facebook's case, you could have a Facebook without Messaging, Photo Albums, and Events, but without them would be far less sticky. In the early days of a network, it will build set of utilities and often buy teams to help bolster them. 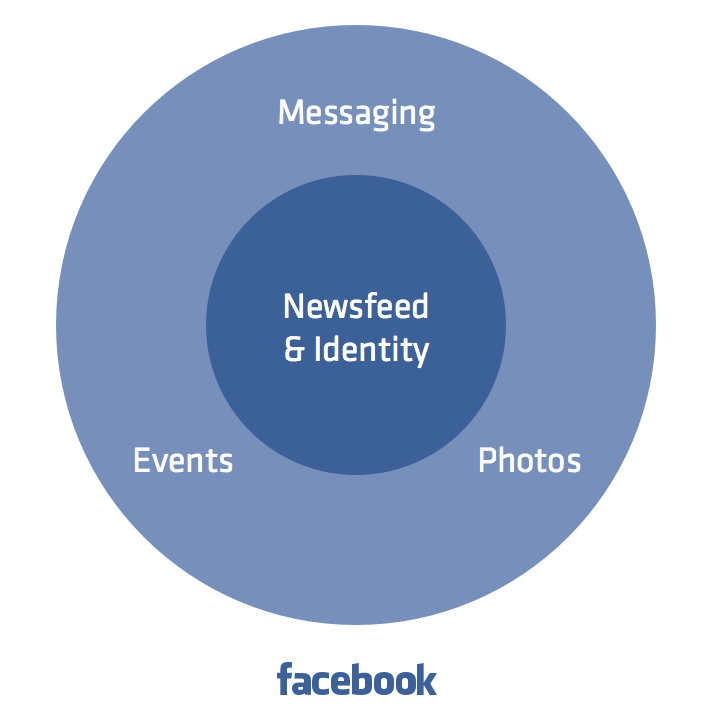 Arguably, Accessories may benefit from having their own brands, as even the average consumer grows wary of investing wholly in applications under a single brand umbrella; conversely, there may be natural limits to the number of functions any platform can or should provide (cough, Twitter Music, cough). There is opportunity for accessories to build truly enormous businesses and maybe even networks on top of the original network's core.

Facebook can count among its accessories Tinder, OfferUp, and, at one time, Zynga. 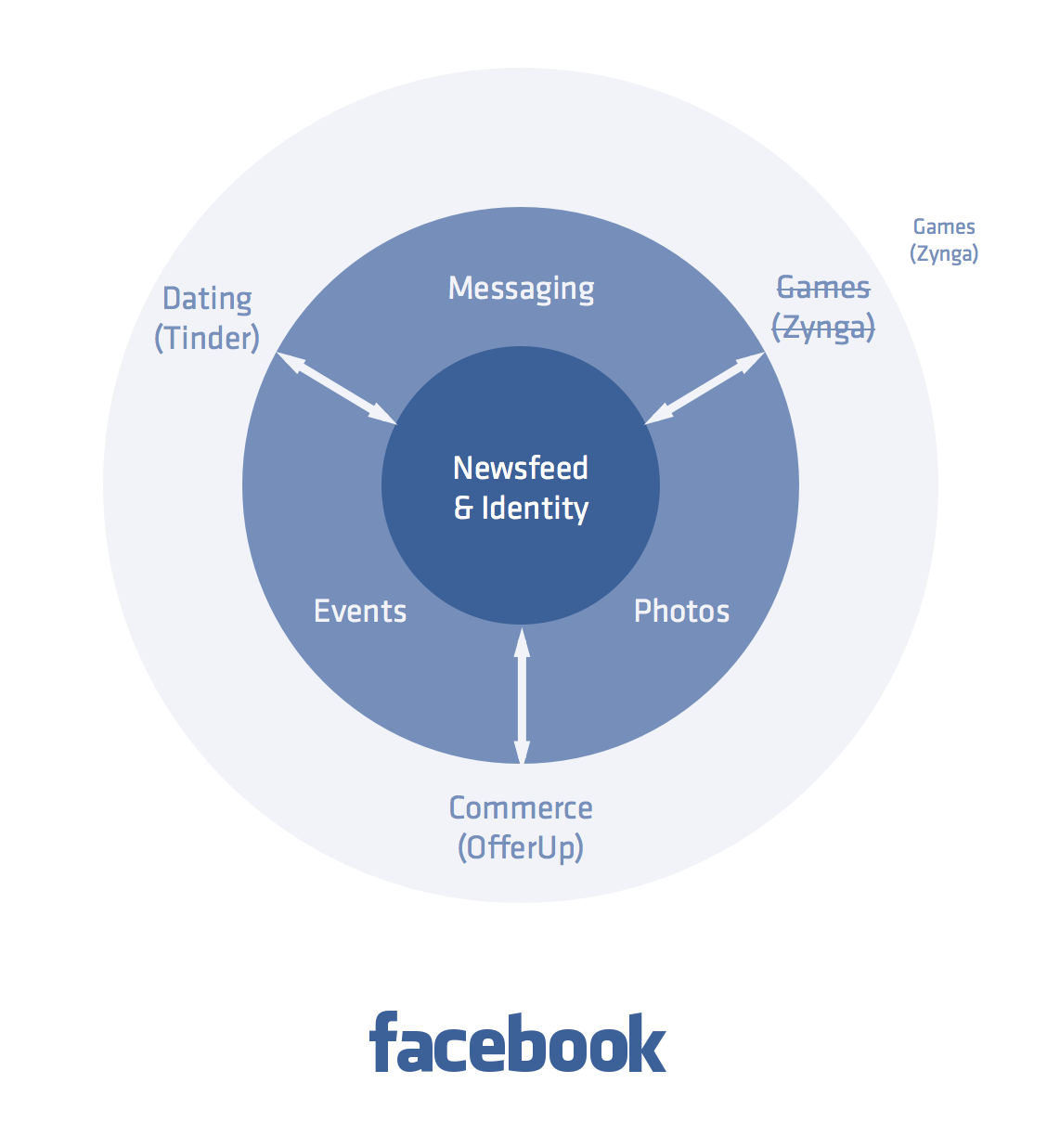 Of course, Accessories are often tenuous. Zynga was able to piggyback enough off Facebook's core to build a huge business, and the likes of SocialCam a big viewership, but Facebook eventually cut them off at the knees. Perhaps Accessories need to achieve some sort of escape velocity, such that if the network owner were to cut them off, it would be sufficiently damaging to the parent network's reputation (how would consumers react if Facebook cut off Tinder?).

All in all, when you look at a Facebook's Core, Utilities, and Accessories, it looks something like this: 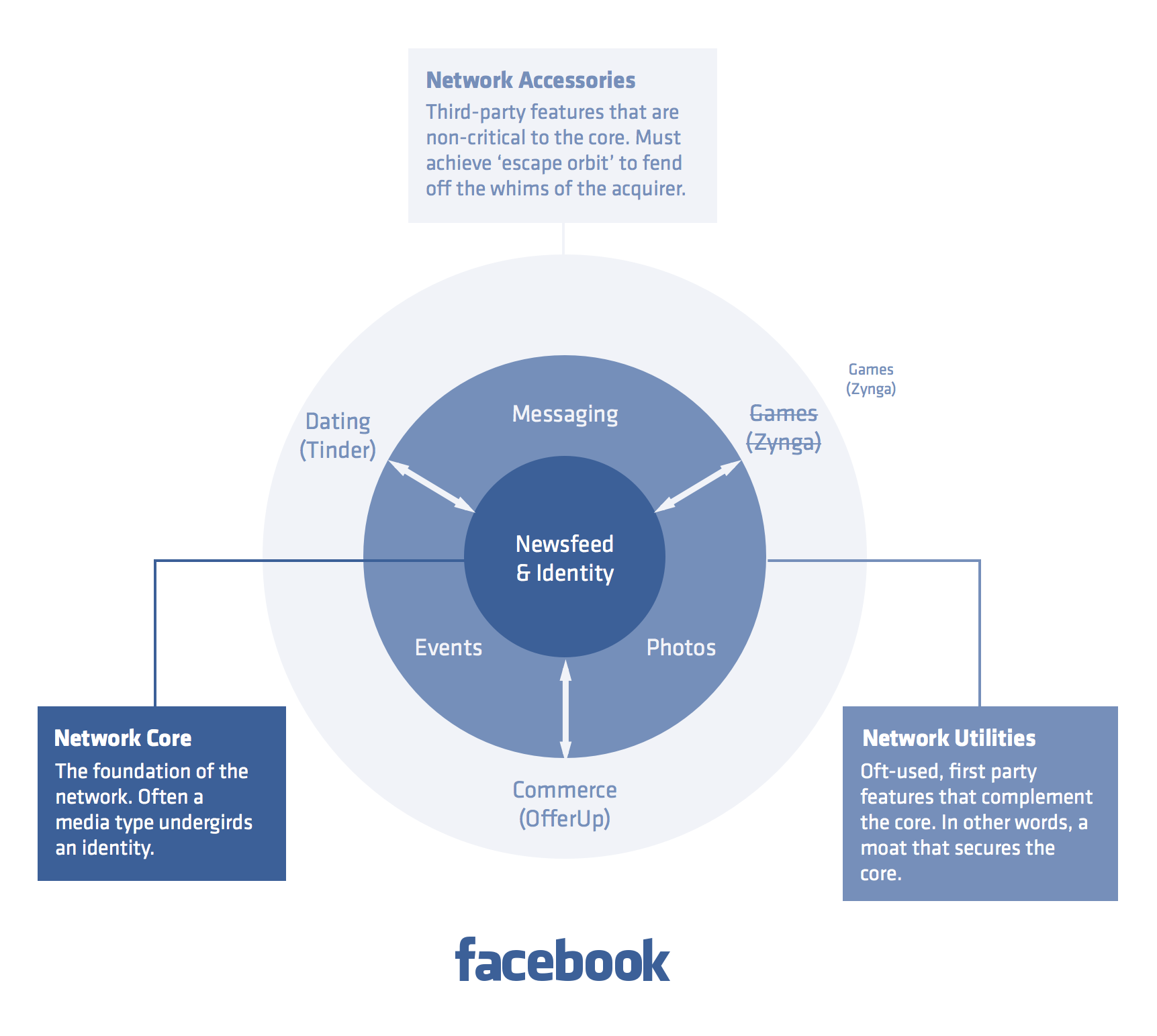 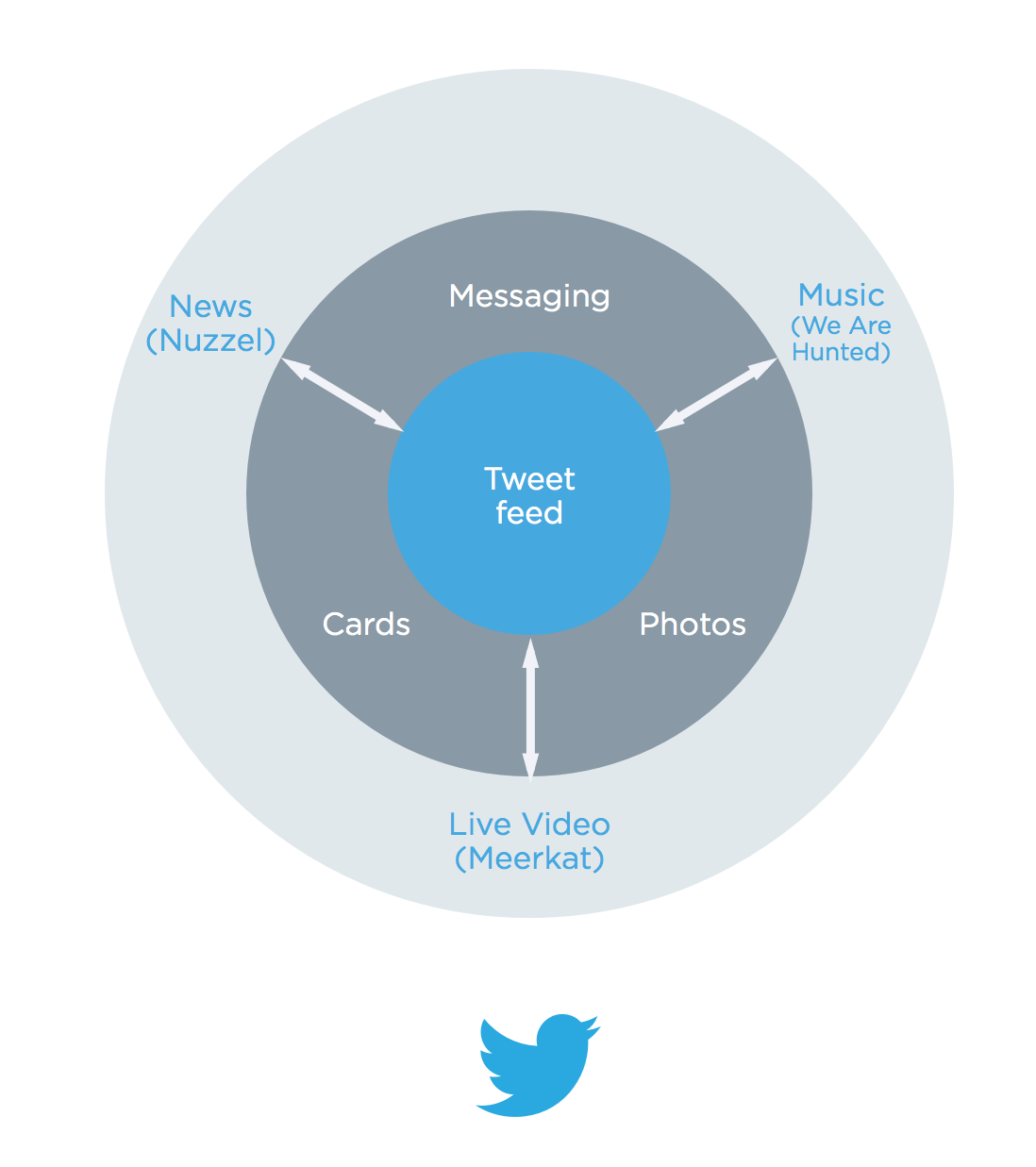 Which brings us back to Meerkat, the Twitterati darling that Panzarino labeled a "Twitter Accessory". Meerkat was recently denied access to part of Twitter's core: its Social Graph. Twitter did this because they recently purchased a would-be competitor. Life in the Accessory Lane may be treacherous, but it's not impossible to imagine that Meerkat has already generated enough velocity to escape orbit.

Whether or not it Meerkat survives therefore comes down to two questions:

The Meerkat affair also raises interesting questions about whether, several years after the birth of all these networks, and with several of them slowing in growth because they've already saturated their market of potential users, we've entered a phase where the networks can grow more, in time spent if not user registrations, through Accessories, than they can from within their own core functions and utilities.

Addendum: In thinking about how I rendered the Facebook network visually, placing the Accessories within the outer circle may have not communicated certain Accessories independence. If you believe that Tinder and OfferUp have reached escape velocity, then this might be a more appropriate way to portray the Facebook Network: 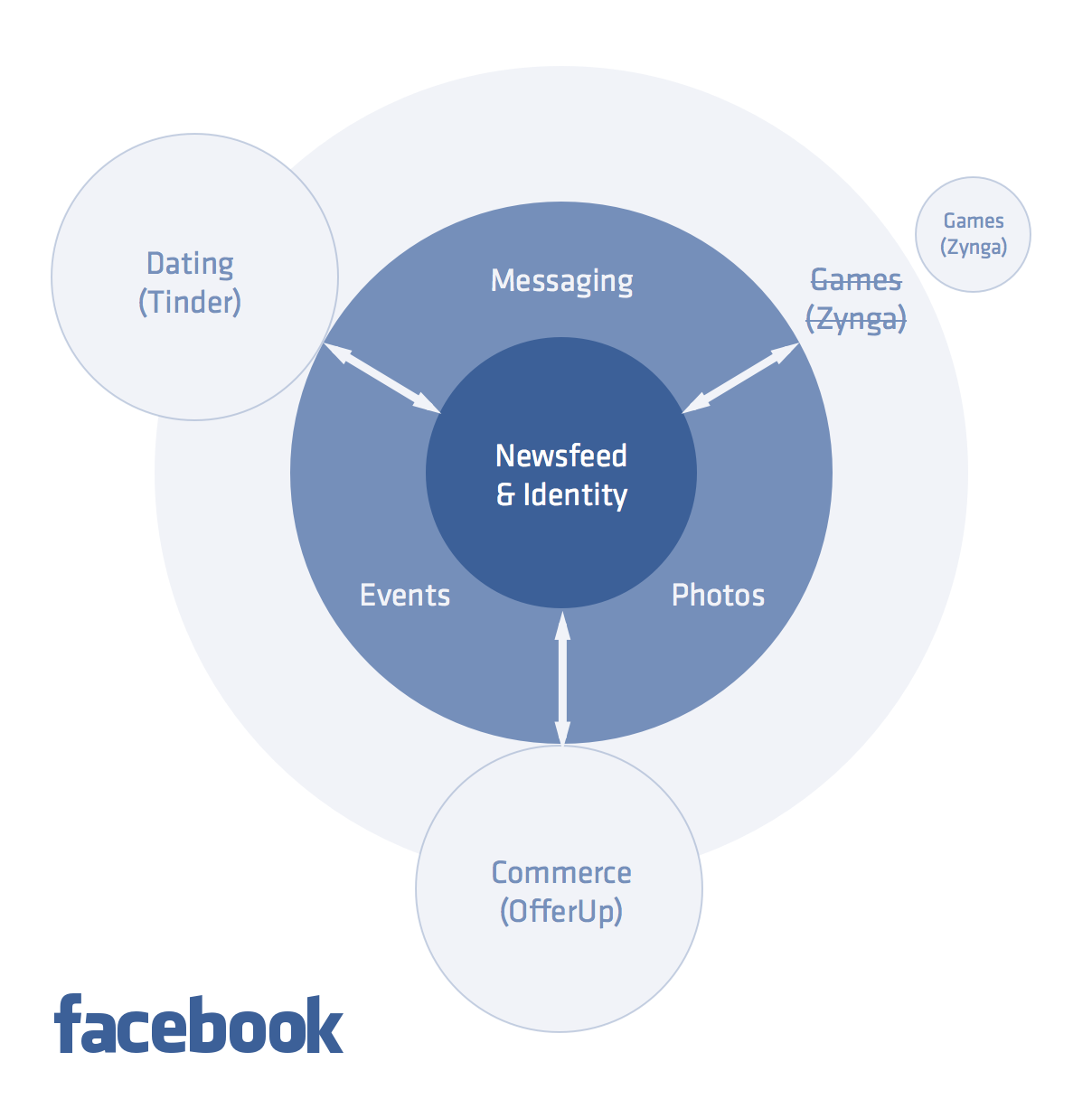 Also, my colleague Joel Monegro, who I neglected to thank in this post, made an excellent point about how the Facebook and Twitter networks grew on top of the internet, a series of decentralized protocols which the networks sit on top of. If one imagines internet networks as novas and supernovas, each with their own gravities and orbits, you could imagine the internet as a sort of Dark Matter. Sadly I couldn't figure out how to draw Dark Matter in my renderings.