“But the theoretical considerations suggest that in addition to left-right, back-forth, and up-down there may be other spatial dimensions. It’s hard to picture, like, where could they be? There doesn’t seem to be any room left and that’s really the point. They are new places that our experience doesn’t allow us to access directly, but according to these theoretical ideas, might be there.”

-Brian Greene in “How can we picture the Fourth Dimension”

Such is the frustration for a layman in trying to wrap his mind around modern physics. You hear phrases like “string theory” and immediately imagine a string, or perhaps 11 strings, trying to see a world with 11 dimensions, as physicists like Brian Greene propose, and the furthest you can get is imagining 11 strings, which get you nowhere.

In The Structure of Scientific Revolutions, Thomas Kuhn coined the term “paradigm shift” to capture the moment when a scientist breaks free of an old paradigm and begins to see the world in a way that, thanks to this new paradigm suddenly makes so much more sense. Copernicus experienced a paradigm shift when he realized that the Earth revolved around the Sun, and Darwin when he discovered the algorithm known as Evolution. Over generations, the rest of us laymen eventually adopted these paradigms, and we see a different world than our ancestors did, and we can do things and understand things better once we grow comfortable with that paradigm.

It was not easy for us to understand the Internet paradigm, but along the way there have been metaphors and even experiences that helped us to understand it. When you connected to the internet through America Online, you’d hear that duck choking on a kazoo sound, and you could accept that black magic thing we know now as the Internet because it felt like an extension of a fax machine. We built up a set of metaphors to help us understand the web, in spite of those inscrutable unbroken strings of text called “URL’s”. Post-AOL, we entered a world with “browsers”, “pages”, “sites”, and “hits”, which helped us understand this thing we could see was real but, for most of us, could not begin to understand how it worked. After all, “any sufficiently advanced technology is indistinguishable from magic.”.

Whereas dial-up internet gave us an audible representation of what was happening under the hood, broadband and wireless internet offer fewer natural clues. This topic has been covered plenty already, but it’s still funny to look down at your iPhone and see the Phone and Mail app icons — a handset telephone and an envelope, respectively. Try as we might to forget the analog past, metaphors from the real, physical world still help us to grok internet machines.

My daughter just asked why we say "hang up" the phone and now I feel 90.

I think the mother of all metaphors for the internet, to date, has been “Up”. You “upload” things, you put them “up on the internet”, the waves of the Wifi icon expand upward. You put things in “the cloud” (an oddly amorphous term for what is actually a discrete system; it works because clouds are “up there”, and in some ways the metaphor of the “the cloud” works because it doesn’t really describe anything). In some ways, though, the “up” metaphor feels quite childish, which is perhaps appropriate given how early we are in the Internet era. As Jerry Seinfeld teaches us, “up” is an appropriate metaphor for one’s youth:

A youthful metaphor for the internet

Still, this metaphor is hardly perfect. You hear people say things like “my pictures are up in the iCloud” and you wonder if they’re struggling to conceive of how it all works (“the files are in the computer??”). You lament the fact that The Cloud cost us Rick Moranis. And you end up with high-pedigree companies with names as unfortunate as “Up There”.

A name like “Up There” is so hostile to end users who might come to them in search of a better way to organize their information, what with their photos spread across “the iCloud”, Photos.app on one'a desktop, the Photos app on their iPhone, Facebook, and Dropbox. Dropbox, now that’s a great name. One can’t underestimate how much the descriptiveness of their name (you ”drop” things in a ”box”) aided people in adopting a technology that would otherwise seem like black magic. Let alone the beautiful simplicity of the metaphor: it’s a folder...that syncs.

Yet Dropbox struggles to find its place in the current world dominated by phones which did away with the file system. Now it’s not really a “box” so much as an app whose contents you can occasionally access through other apps. The deterioration of the metaphor is hardly the reason for Dropbox’s slowing growth, but it doesn’t help. The Dropbox metaphor is, in a sense, a victim of creative destruction caused by the disruption of Internet by mobile.

Moreover, several years into the Internet becoming ubiquitous via mobile, the novelty of putting things “up” in the cloud has worn off, and many of us now wonder if there’s an alternative to putting things up in this nebulous (see what I did there?) system that we don’t control. It’s now that we’re exploring technical alternatives to just putting everything up there where the owners of the clouds can do whatever they want with it: Bitcoin, blockchains, bioinformatics, mesh networks, and encryption.

I wonder, what are the next metaphors that might define these technologies? We know that rational arguments about privacy and data ownership isn’t enough to sway people from incumbent technologies that adopt the standard cloud paradigm — see the trail of dead that promised a private Facebook, or the limited (albeit growing) audiences using DuckDuckGo or Telegram. You can’t just explain to people that these technologies are better and safer. You have to show it.

You can see a few trivial metaphors on your iPhone today. Telegram, for example, puts a lock for your chats front and center, but this only locks the app once it’s backgrounded (i.e., if you switch to another app and then come back five seconds later, you have to enter your passcode to view your chats again).

This isn't very particular to Telegram, though. Banking apps tend to offer these kinds of security measures too, and Touch ID all over the iPhone provides a useful metaphor unto itself. The real challenge for apps that promote encryption as a selling point is conveying that the data you see locally is not the data that Telegram can see. In other words, that all the data you’re creating right then and there with your thumbs is just gobbledigook for Telegram, or any other encrypted app. 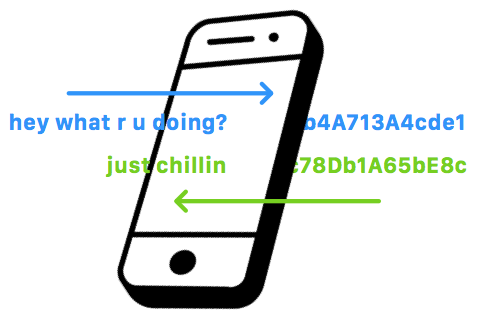 How to visualize encryption?

Snapchat, it’s worth noting, built a giant network on the back of visually conveying impermanence, even if all your data ends up on their servers anyway. Will the next impermanence app go one step further and never store your data? If so, can they convey this as a selling point to users in some way that’s “show, don’t tell”? 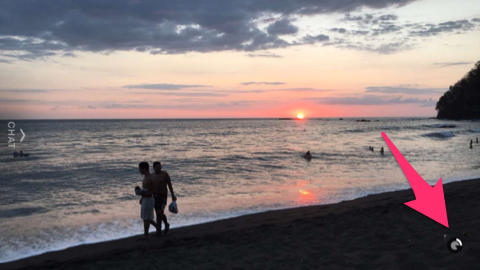 With mesh networking, the proposition is passing data from one device to another without ever sending it up to the internet. OpenGarden’s Firechat fails to convey that proposition very well, and Jott Messenger has mixed results, but take a look at the logo for NYC Mesh. Whereas the icon for Wifi conveys upward movement, your eye moves from top to bottom across the NYC Mesh logo.

Yet when you look at the products that most blockchain companies, that metaphor breaks down quickly. In fact, the harder I’ve tried to come up with any metaphor for the blockchain, the more I struggle. I don’t think I’m alone (worth noting that the mega-design firm IDEO has been working on this). Bitcoin and the blockchain being so hard to pin down is probably the reason that most visualizations of Bitcoin are that cringe-worthy gold (bit)coin…

I cringe every time I see a gold, sort of skeumorphic Bitcoin

And that most visualizations of blockchain look more or less the same as those we used in the early days of the web, when The Information Superhighway was purportedly a thing…

I think the thing that’s so tricky to pin down about Bitcoin and the blockchain is that the closer you look, the less this looks like the internet we know, and the more it looks like the real world we used to encounter. One of the major innovations of Bitcoin, after all, is its scarcity. Because like a real-world natural resource that is finite in its supply, Bitcoin carries value that is more natural than fiat currency operated by governments. And when you look at how blockchain companies are seeking to decentralize the functions that the internet centralized, it looks remarkably like the world before information technology. Something like Open Bazaar, a blockchain-powered marketplace, while standing on the shoulders of a giant technical achievement in Bitcoin, is actually less encumbered by incumbent, middleman technologies than the marketplaces — Amazon, Etsy, eBay — we rely on today.

In that sense, perhaps the best way to convey Bitcoin and the Blockchain is the absence of metaphors. In other words, if you really want to understand the implications of a world where products and services are powered Bitcoin and the blockchain, try to forget all the metaphors you’ve built up around the internet. Only then, perhaps, in that void, will it become easier to see this new paradigm. Like the heliocentric model of the universe, the origin of species, or the technology powering the internet, you can forget all the complicated bits under the hood — gravitational pull, DNA replication, and routers, switches and servers, respectively — that make these technologies possible, and understand them for what they are.