In the winter, from the USV office on the 19th floor in Flatiron, we see beautiful, pink and purple skies during sunsets draping Manhattan. One of us in the office will walk to the southwest side of the office to take a picture, and others will follow. I've done this myself many times, which feels natural in the moment but always strange in hindsight; it would be easier for me to ask for someone else to send me their photo, or to search Google Images for beautiful sunsets over Manhattan and then save that photo, or to just remain satisfied with the photo of the purple and pink sky I took the day, week or year before. And yet I can't help it: I re-take the photo every time. Human like me remain transfixed, and sometimes even paralyzed, by the process of authentic creation.

One could say that we live in a time — powered by the networked, high-end camera and computer we carry in our pockets — when authentic creation has never been greater in one sense, and never lesser in another. This has been driven by the ever-falling costs of creativity. 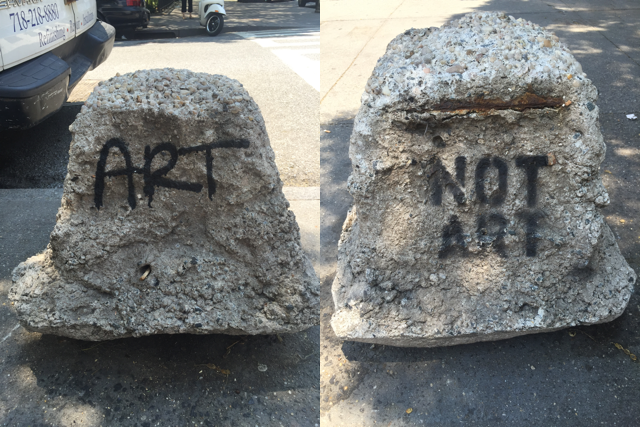 What is art when the marginal cost of creation is zero?

The transition from film to digital photography vastly expanded the photographic medium by reducing the marginal cost of taking a picture to zero. Even with a cheap disposable camera you picked up in a pharmacy in 1995 (remember these?), it cost time and money to develop the film. Hence every photo you took was precious, or costly, causing you to think twice about whether a photo was actually worth the real estate on your roll of film. Today I take more photos in a single instance of burst mode on my iPhone than can be captured by an entire roll of a disposable camera, and in a fraction of the time it took to wind the film from one segment to the next.

The absence of marginal cost in photography had all kinds of implications, and is arguably the most transformative of any innovation brought about by the flourishing of smartphones. We can now take however many photos we want, anywhere we are, and upload them in an instant. Billions of dollars of enterprise — everything from Snapchat to Figure 1 — and an unquantifiable amount of cultural and social value have been built on top of people carrying around a zero marginal cost networked digital camera.

We are beginning to perform many more creative endeavors at zero marginal cost. Manual, tedious edits in Photoshop can now be performed with content-aware fill. There are very few scenarios in which people would have been willing and able to do to this photo what Photoshop can do in a snap:

Magic Pony and Artomatix are doing similar work that could turn the design process on its head. Instead of designing, say, an intricate brick wall pixel by pixel for use in a video game scene, one could take a photo of a brick wall with an iPhone and use Magic Pony or Artomatix to extrapolate the rest of the wall. Not unlike the thesis of Wired’s “The End of Code” that “soon we won’t program computers...we’ll train them like dogs”, the design process may one day resemble a form of guidance rather than one of meticulous creation. And when you consider that large game studios employ many, many designers, one can imagine how the cost of game creation could be reduced by something like Magic Pony, Artomatix and other tools.

No Man’s Sky, soon to be released on the PS4 in August, is infinitely novel via its generative design of galaxies. The game developer actually had to build reconnaissance probes inside the game to capture what the terrain and life look like on the vast number of procedurally-generated planets.

The procedurally-generated, infinitely novel and diverse worlds of No Man's Sky

Brain.fm leverages A.I. to improve focus, relaxation and sleep. It attunes in response to biomedical data, something that is impossibly tedious for a human musician. Fortunately machines don't suffer from tedium. Entire songs can be created instantaneously and to your specifications with Jukedeck. I created this song in less than a half dozen clicks. Don’t like the song you created? No problem, just trash it. Consider how different that is from the manual process of song composition and performance; when there is no cost of labor or sentiment in creating art, there is also no price in destroying it.

In that vein, recall the angst suffered by Dong Nguyen, who could not suffer the attention and responsibility for a game whose outsized success he attributed to “luck”. Now imagine an alternate scenario: A computer-generated game that is initially at least mediocre to play but can evolve according to some set of heuristics. The more people play, the more the game optimizes. What would it optimize for? Difficulty? Addictiveness? Cuteness? Average user session length? I wish I knew the answer and had the skill to implement this, because this is how we get to a company with one billion users and a headcount of one:

On relatively little capital, Instagram got to 100m users. Then, Whatsapp got to 500m. Eventually, a solo entrepreneur will get to 1B users.

Elsewhere, computers are competing admirably with humans in fiction writing contests, getting poems published in literary journals (based purely on merit), writing political speeces, generating captions for images, and writing new episodes of Friends. In the realm of entertainment, I Am T-Pain and Snapchat employ technologies that dramatically broaden who can practice music or cartoon/film.

Snapchat makes everyone a cartoonist

And because this is software, they’re doing it at low marginal cost (not always zero quite yet because some of the more ambitious things people are doing today require supercomputers that not only bear high fixed costs but enough computing cycles to be expensive; naturally the size and cost of these machines is ever-decreasing).

You may have noticed that the auto-Friends-screenplay-generator is not really a great writer now (I’m sparing myself from taking a shot at the actual writers of Friends). Writing entire scenes is a fairly significant task, and autonomously entertaining viewers is a high bar to clear. Moreover, writing complete narrative arcs for theater, television or cinema is a task so large we may not be able to accomplish it any time soon. However, recall the content-aware fill example in Photoshop: You can generate tremendous productivity gains not by creating a photo of a kid on a beach from scratch, but rather filling in the bits that would make it a better picture. In the same vein, a writer could build a narrative arc and rely on a machine to make suggestions for dialogue, to “fill in” the screenplay as it were.

Computer-assisted “fill” will also be vital in manufacturing and product design. Autodesk’s Within assists engineers and orthopedic implant specialists in designing objects that are better, stronger, and/or faster than humans’ would have otherwise been able to accomplish. If this generative-designed bicycle looks strange...

A bicycle generatively designed by Autodesk's Within

...it’s because computers aren’t beholden to historical or cultural legacy, akin to how Go players say they would have been slapped for making the kinds of novel, head-scratching moves that AlphaGo did in defeating the world’s Go champion. So maybe the design of that bicycle looks strange, but if a bicycle manufacturer needed to employ only a fraction of the designers and engineers it once did, it might be significantly less expensive, let alone more durable than any human-designed bicycle on the market.

The aesthetic pleasantness problem can be solved. Already a number of projects aim to actually curate designs or aesthetics that people actually like. EyeEm has developed algorithms to identify which photos will be received as aesthetically pleasing. Archillect is a bot that autonomously curates beautiful photos from around the Internet.

We did it! Unique covers for Richard Dawkins’ books on evolution. No two copies are the same https://t.co/FiDLC3g2KL pic.twitter.com/o5MZqzW8lD

It’s unclear if or how infinitely original design work adds much value beyond novelty (more precisely, the novelty of novelty). One could imagine an application, call it “AutoHallmark”, in which one uploads an affectionate photo of him or her with his partner and generates a romantic poem that you could print for your anniversary. Would it matter if that poem is completely unique? Who would know, or even care, if a one out of every thousand poems generated were re-used?

Likewise, creativity at zero marginal cost means that any creator could choose to build the world's largest library of photos, music, or art. Whereas having a large library was once very valuable because rights to creative work are scarce, work that was created at zero marginal cost and is naturally royalty-free must abide by a very different economic model.

In fact economic models around creativity have largely been governed by technology. Over the last 150 years we’ve undergone three technological phases in the consumption of art, culture, entertainment and creativity. Prior to the invention of the phonograph or the film projector, it was impossible to consume music or film on one’s own, hence we paid for scarce live access to musicians or theatrical performers. The second phase, between the time of those inventions to the invention of ubiquitous internet, generated another layer: Physical media, which greatly popularized and democratized art and culture while also giving rise to organizations like the music labels and film studios, who monetized production and distribution of those goods. The last phase is marked by a brief period in which the download obviated the friction of buying physical media, hence unbundling the album or the TV series, and now a period when ubiquitous streaming eliminated the friction of the download, which made purchasing a single song or show archaic. Value still accrues to those music labels and film studios, but now also the operators of the delivery mechanisms: the likes of Spotify, Apple, Netflix. And live, “authentic” events like live concerts increasingly become the way to monetize off those platforms.

As we move to a world where not only the consumption but the creation is driven by technology, value will almost surely accrue to a new layer: Organizations which can capture people’s attention with work that costs only as much to create as it does to keep the servers running.

The biggest question is how much we continue to value pure authenticity. For example, will a song that was written only by a human be perceived as more valuable than one written at least in part by a machine?

Perhaps this is really just a false alternative. After all, that redundant photograph of the pink and purple evening sky I take from my iPhone five times per winter, because the actual taking of the photo feels authentic? I might tag it #nofilter, but God knows I've got the HDR on.

This blog post was written, in part, after a conversation with Ross Goodwin, who pointed out that the digital camera spawned creativity at zero marginal cost. Thanks to Samim Winiger for reviewing a draft of this post. Alex Danco's examples from his series on Emergent Layers was also helpful in organizing some of these thoughts.

And if you’ll be at the Nuclai conference for “Artificial Intelligence for Creative Applications” with me in July, let's meet.