In blockchain-based networks, leadership functions more like a liability than an asset

While capital hasn’t been scarce in a world where a protocol organization can raise hundreds of millions from retail investors, venture investors do offer two things that are relatively scarce: counsel and compliance. Both of these things enable a young founder to compensate for his or her inexperience in developing an organization and treating the organization’s users and staff well.

Without counsel and compliance to offer, venture investors would have little to no leverage in participating in a token-based economy at a discount to retail prices. Hence SAFT’s and other instruments that retrofit token-based fundraising to Silicon Valley style venture investing.

Similarly, a venture investor requires that a network has founders. No founders, no counsel or compliance to sell for a discount on tokens. Were founder-less entities like Bitcoin, Monero and Mimblewimble to become the dominant model, venture investors wouldn’t lose some leverage; they’d have nothing to leverage.

It’s worth distinguishing, for a moment, what it means to be a founder, as everyone would agree that Bitcoin, Monero and Mimblewimble have had various very influential people leading the projects but not founders. Satoshi might best be described as the Creator of Bitcoin, and Bitcoin has been better having an anonymous Creator than a Leader/Founder; the worst thing that could happen to Bitcoin would be for Satoshi to reveal himself and take on the role of Messiah, much as the most disruptive thing that could happen to Christianity would be for Jesus to come back and start meddling.

Monero and Mimblewimble/Grin have and have had more prominent leaders, but they’re not founders by any stretch, and it’s not a coincidence that these networks eschewed pre-mines or ICO’s. A founder has privileged access to equity in the venture, and generally has skin in the game by dint of what he or she would have if he or she capitulated: A higher salary at another company or cash from an acquisition. The creators/leaders of Bitcoin, Monero and Mimblewimble are merely advantaged by being close to and having belief in the network. They have skin in the game by dint of the capital they could invest as a miner (or, in other networks, a staker).

Yet founder-driven, ICO-funded networks like Ethereum, and founder-driven, venture-supported networks all seek the same end-state: a network that lives and thrives beyond the influence of dominant leaders. Networks are not truly decentralized when they’re so influenced by the vision and commits of so few people. More pragmatically, highly concentrated networks are also not compliant with the guidance provided by the SEC. The two most interesting points from the SEC’s guidance are that:

It’s in this light that the tension around Silicon Valley/venture style founders of decentralized networks actually becomes fairly clear: Whereas leadership is an asset in the centralized world, founder-style leadership of a decentralized network is a liability. Like the most common form of liability—debt—it’s an instrument that can help create some escape velocity, but you need to pay it down to create something viable.

In the parlance of liability, one might say that Bitcoin, which has escaped the oversight and influence from its primary leader, is “Leadership Solvent". Whether Monero or MimbleWimble/Grin leadership-solvency will actually help those networks win out over leadership-driven (“leadership leveraged"?) networks like Zcash is beyond my ken, though I’m inclined to bet on a network with founders/leaders as seemingly benevolent as Zooko, a fair (but not necessarily ideal) founder-incentivization structure, and an appetite for real community governance.

After all, leadership is a good thing. Linux, Git and Bitcoin would never have pervaded without Linus, Linus and Satoshi. (As something of an aside, I think the most powerful form of censorship-resistance enabled by blockchain networks is the fact that the decentralized firm can’t censor anyone from hitching their wagon to a luminary’s star the way, say, Facebook could “censor" participation in the value created by Facebook by choosing who to hire.) But leadership is good so long as part of that leadership is building an organization that can thrive without the founder. I’m skeptical that Ethereum can wean itself off its effectively centralized leadership, to its detriment. In other words, like Tesla skeptics, I’m skeptical that Ethereum can ever pay down its (leadership) debt.

So if leadership is good, and the wealth of knowledge and experience accumulated by Silicon Valley venture investors would be helpful to those leaders/founders, what are the right incentives?

Let’s say that for a successful traditional venture-funded company, a founder might expect this kind of trajectory for his personal wealth: 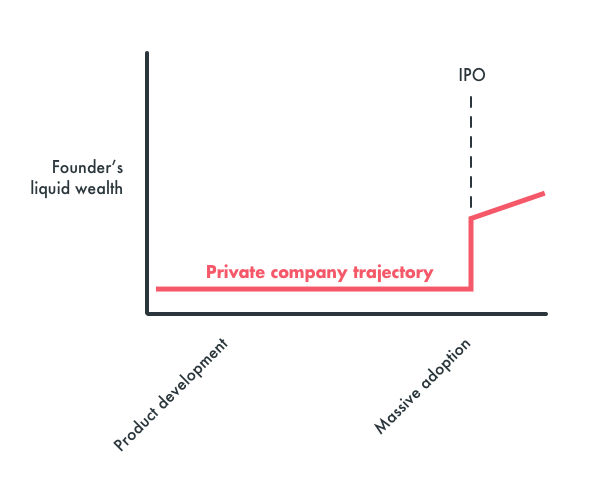 And Bitcoin or Monero, which confers no privilege to its creator/leaders beyond proximity to the ideas that would lead one to mine or buy, would look like this: 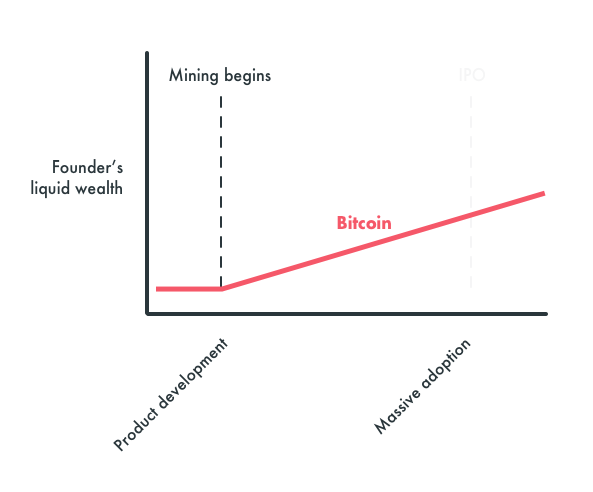 Tokenless (dYdX) or profit-uncertain protocols (such as 0x)—see Eric Meltzer’s recent writeup on this—where creators/founders might only make money by starting a separate business capitalizing on the protocol. It’s very unclear if this could reasonably produce a large business, but, similar to a mined coin with no pre-mine and no sale, there’s no privilege beyond proximity to the protocol: 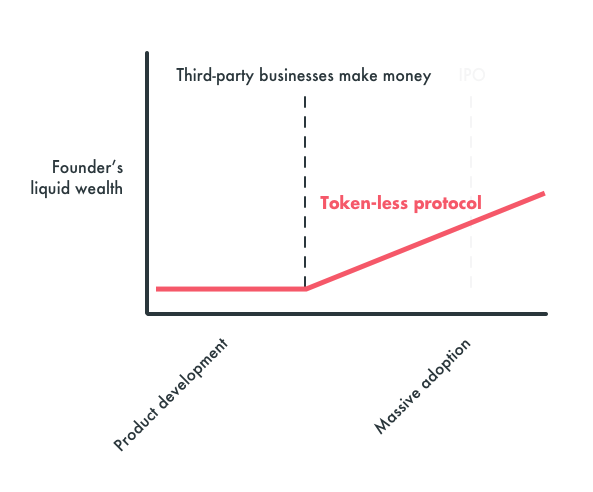 Wealth accrual to founders of token-less protocols, or protocols where the token carries highly uncertain value

At last, let’s turn to founder-driven organizations, It’s uninteresting to discuss this in the context of take-the-money-and-run ICO’s. We know that abundant wealth, let alone shortcuts to abundant wealth, demotivate founders from creating value. But let’s be extremely generous and imagine a big ICO that’s sufficiently liquid early on and actually finds product market fit. The trajectory of the founders’ wealth would look something like this: 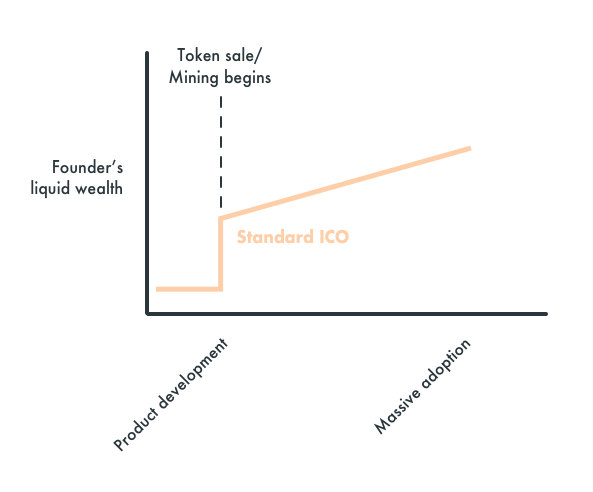 It bears repeating: This is an extremely generous projection because early abundant wealth will almost always fail to sufficiently incentivize a founder/leader.

Zcash’s Founders Reward is a compelling attempt to make rewards to leadership and early supporters (not least their venture investors) more native, as the reward is baked into the protocol. This makes the reward transparent to all, unlike privately executed contracts like SAFT’s. Moreover, and more importantly, the vesting schedule incentivizes Zcash’s leaders to create a valuable product across several years: 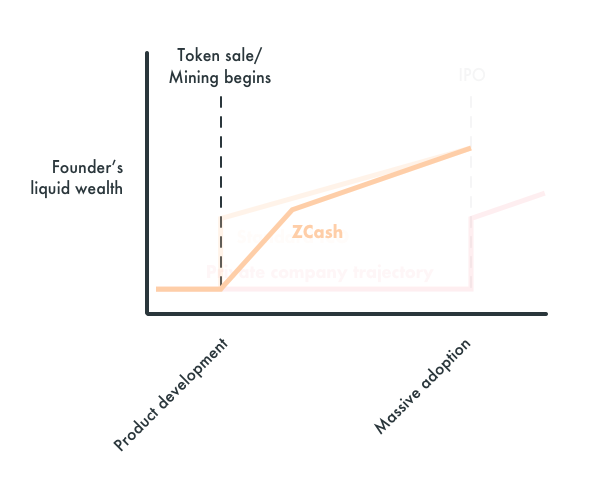 Wealth accrual for the founders and early supporters/investors of ZCash

Yet Zcash’s Founders Reward is fairly agnostic as to what Zcash is liable for—creating a valuable network that derives robustness and innovation from a diverse and meritocratic set of developers and leaders. In other words, a network that is leadership-solvent.

Nick Grossman of USV has addressed this indirectly in “The Path to Decentralization: Self-Destructing Companies". I know of at least one investor that is structuring agreements to provide liquidity to founders only once the founders have unseated themselves. The reward model would look something like this, more in line with what we’re used to from traditional venture-funded startups: 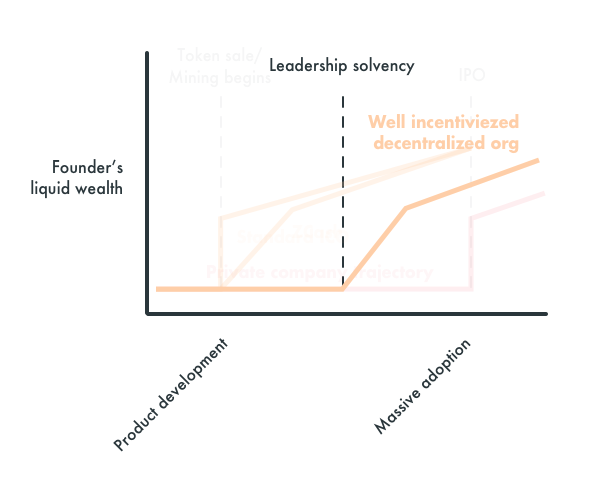 Wealth accrual for the founders of networks where the company, or leadership group, “self-destructs"

In contrast to the ways we’ve seen traditional investors retrofit blockchain investments, this seems like a unique and compelling attempt to refit incentives around a new kind of solvency. It aligns well with both the spirit of a decentralized network — it can thrive in the absence of centralized leadership — and SEC guidance — it doesn’t provide outsized reward to the founders until they’re no longer promoters. It’s worth noting that this represents yet another underplayed form of censorship-resistance: If you don’t have active leadership, who are regulators even going to communicate with? In other words, a better way to achieve censorship-resistance than convincing regulators that you're decentralized is to not have anyone who can answer the call from regulators.

The latter form of blockchain network investment is one of the more intriguing things that I've seen of late, and gives me some optimism that Silicon Valley venture can meet decentralized networks where they are, rather than the other way around. If anyone else is familiar with similarly new models, I'd be happy to append them to this post.