Three heterdox and cynical but optimistic takes on crypto

Here are my three most heterodox takes on crypto:

With all that said, I’m quite optimistic that crypto is going to work.

Why? For one, crypto has a great use case right now: belonging. With churchgoing and other forms of IRL community on the decline, many things need to fill the void. And since having private thoughts and beliefs separate from work is sort of passé, crypto is an excellent vehicle for infusing work-life with a community-driven mission. This renders the “Isn’t it just tokens and financialization all the way down?” critique sort of moot: After all, religions and other tight-knit communities also work just fine without being reducible to an underlying, real-world, income-bearing assets. They just have other kinds of growth loops. Good luck competing with religions.

And of all the religions we could have invented to replace what’s on the decline, crypto is a great one. Satoshi and Vitalik’s contributions to this world have been as selfless and benevolent as one could ever hope for: They’ve inspired an entire generation of young, capable people to be relentlessly optimistic, which is awesome. There are surely thousands of S-Tier people who would work on really hard problems in crypto in their spare time even if it didn’t pay.

Web 2: Find a viral consumer use case, and figure out how to monetize it later.

Web 3: Get the economics of how to provide the infra behind a service right first, and then figure out the consumer use case later.

Though it incentivizes a lot of unsavoriness and scamminess due to the economics, a technology wave with a business model and distribution nearly baked in is quite a growth loop.

If all the money and brains are running in one direction, like it or not, that's where the future lies.

Which is to say that crypto has the benefit of all the fervor and convenient obfuscation) that come with religion and near-term, irresistible, liquid financial incentives. It seems like it will be more than enough to keep lots and lots of people hanging around the rim until the Fed has a major liquidity crisis or some nation breaks and goes rogue and crypto breaks through. 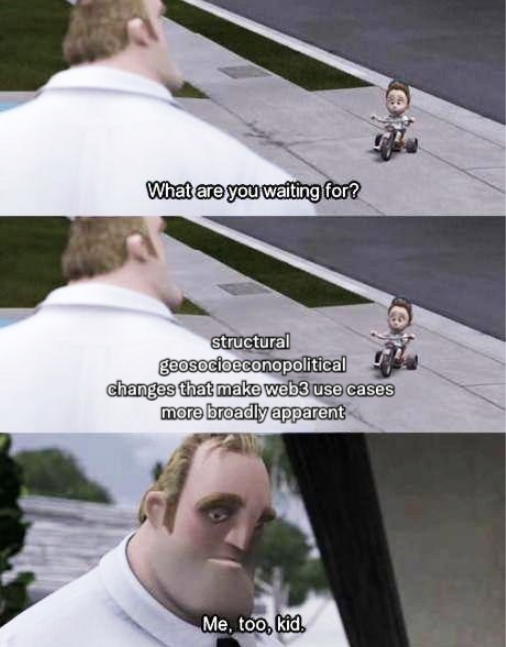 Were I 10 years younger (not quite as young as the kid on the tricycle, but younger than I am now) I’d surely be patient and optimistic enough to invest my time in crypto. But now I’m the dad, and I’m counting on the money I’ve in crypto to put that kid through college. I’m optimistic.