A case of mistaken incumbency

The Messenger Platform isn't the new App Store, but Messenger for Business might be the new web

It's not difficult to find analysis of Facebook's recent announcements at F8 suggesting that the Messenger Platform is the new App Store. The Economist writes: "So Facebook Messenger, which is itself an app for smartphones that run on Apple’s iOS and Google’s Android operating systems, will then be competing with those operating systems’ services for buying apps and downloads. In plain language, it could become the app that ate Apple’s app store."

I'd be surprised if Messenger ate much of anything from the App Store. Disruption comes from above in mobile, making it difficult to eat the incumbent platform from the inside out, as Google did to Microsoft on the desktop. In fact, the so-called app store you'll find in Facebook Messenger today was quite certainly sanctioned in advance by Apple, as it otherwise violates Apple's App Store guidelines:

By virtue of exempting Facebook from its rules, we can probably assume that Apple not only approves of Facebook's endeavor, but believes it's aligned with their long-term interests. After all, Messenger apps are merely accessories to the Facebook network, glorified keyboard apps that serve to input content into Messenger, and little else.

(To that end, if you believe that third-party keyboards are potentially apps that you keep open all the time, I wouldn't be surprised if the smarter long-term play for these Facebook accessories is to actually build a third-party keyboard that cuts across all messengers. Riffsy, one of the Facebook's launch partners for the Messenger Platform, already does that.)

The Messenger platform appears to be an extension of Facebook's existing mobile app promotion strategy, rather than a wedge into a world where apps live on Facebook. Evolutionary rather revolutionary, unless there's a surprise coming down the road.

Take this with a big grain of salt, because Mark Zuckerburg and David Marcus are proving to be modern-day prophets, but there's only one path I can see which positions Facebook as a veritable app store: A breakthrough in web technology that enables you to do something as sophisticated as Talking Tom in HTML. Those kinds of things can only be done right now with a native runtime, and Apple would be very unlikely to ever let an app download executable code, or make that exception for Facebook. So Facebook is stuck passing off these "Messenger input" experiences to other apps that are distributed through the App Store, rather than serving or hosting the apps themselves or delivering them via web views.

If there is an incumbent that should feel threatened by the announcements at F8, it's Google. Messenger for Business (a B2B2C play) is seemingly much more transformative than the Messenger Platform (largely a B2C play). If you're a retailer today, you must be on mobile, which means that you must be on iOS, Android and the web. What can end up happening in this scenario is that the mobile web version plays third banana in engineering priorities, doesn't convert as well as the native apps, and thus begets a vicious cycle in which the mobile web version gets further deemphasized and degraded. Between the web (left) and iOS (right) versions of the Bloomingdale's app, which mobile experience do you think converts better? Which one is getting more love? 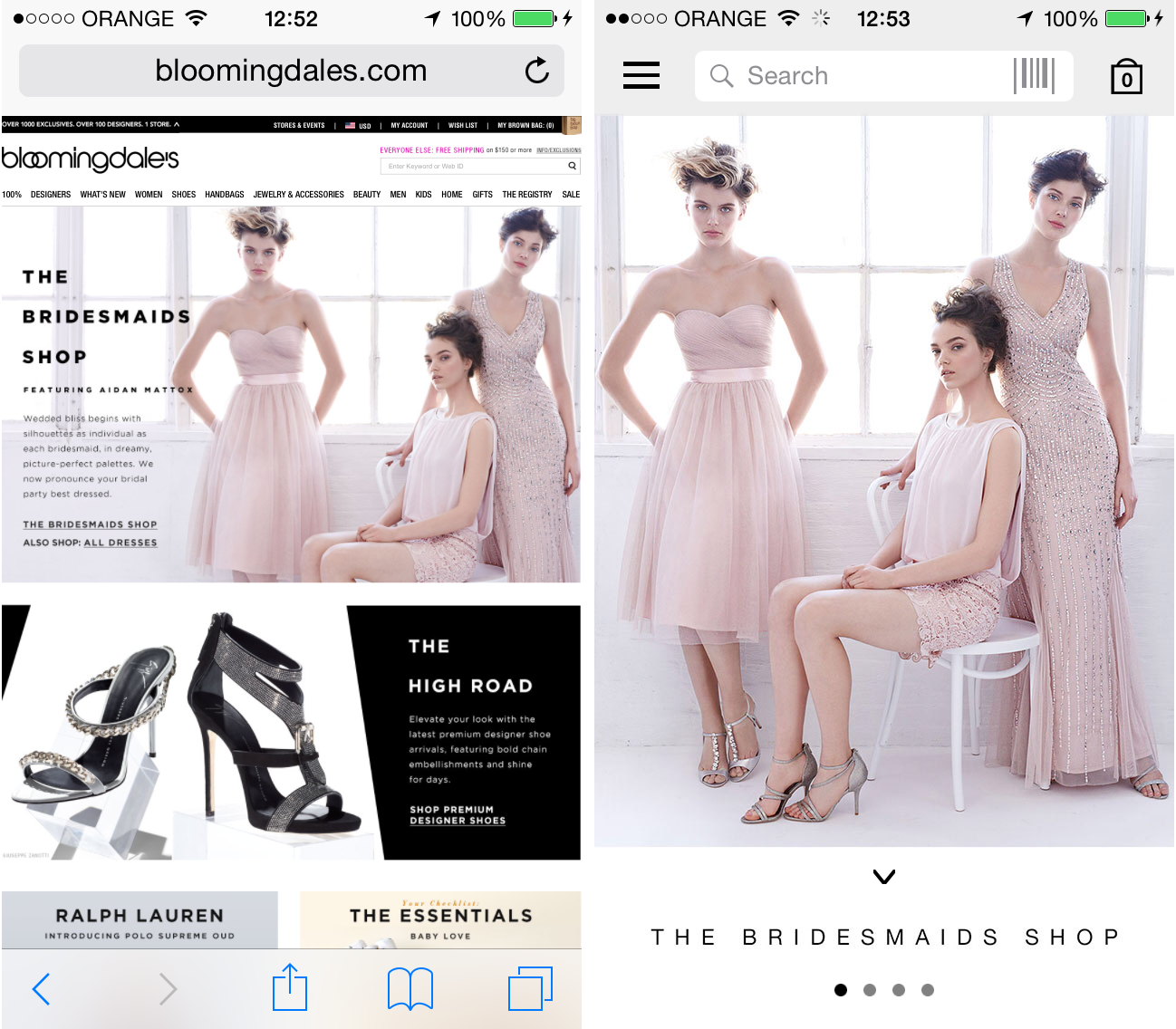 Between the web (left) and iOS (right) versions of the Bloomingdale's app, which mobile experience do you think converts better? Which one is getting more love?

When you factor in how much easier it is for Bloomingdale's to register users for push notifications than it is for an email newsletter, and that Apple Pay will likely not be available for the mobile web as it is for native apps, native apps clearly take priority.

Now Messenger for Business comes around, enabling a communication channel between retailer and end user that's more intimate than ever. If it converts better than the mobile web does, which is possible and maybe even likely, that's a compounding loss: Not only will it further divert attention from mobile web development, but consumer demand will aggregate around Messenger. In a Messenger for Business world, when you think, "I want to buy a new pair of shoes," you'll either search or browse Messenger for retailers with shoes. You won't Google for them, because you'll know that the mobile web experience is likely to be inferior.

And if Messenger for Business converts even better than native apps do, Facebook could enable retailers to offload the duplicative mobile app development they're all doing and focus more exclusively on Facebook marketing. In a manner that's similar to Facebook's approach to news ("Hey content creators, keep doing what you do best — content creation — and let us do what we do best — publishing"), Facebook could enable retailers to focus on what they do best — product curation, product development and customer service — and let Facebook operate the mobile shop. Recall that Google is fine with Apple selling phones as long as customers turn to Google for their search queries; if searching the mobile web becomes secondary or tertiary behavior, however, Google doesn't just lose on iOS, they lose on Android. In short, when the web loses, Google loses.

What with Google Maps dominance and businesses' longtime focus on discoverability within Google, it's interesting to imagine how strongly Google would have been suited to do this had they figured out social, or not let mobile messaging whither on the vine, as they have. In a Messenger for Business world, they have more to lose than anyone.